So, I guess it's been a year since I last posted here.  How time flies!  I'm getting back in the family history mode again, and in that process discovered this short video that describes how I feel about recording and sharing family history.  Enjoy!

I know that I jump around a lot on this blog, writing about different families, scattered events,  and random places.  The truth is -  I write what interests me at that moment, and that doesn't usually follow a predictable order!  When I start researching, I can very easily get off on a tangent and end up many miles and several generations from where I started looking.

You  may have noticed that I've already included several posts about Leona's history.  For a while I wasn't certain I should include her history on a blog about her husband, but I finally realized that I can't really write about Lou's life without including Leona.  I couldn't figure out where to draw the line between his story and hers - and I didn't want to start another blog!

So since my interest right now is on the Bolings, let me introduce you to the family: 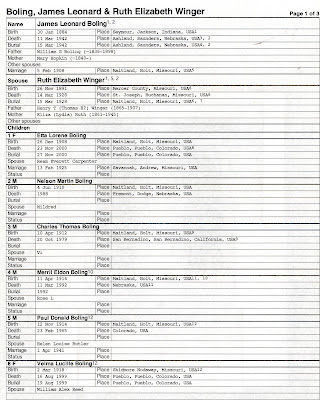 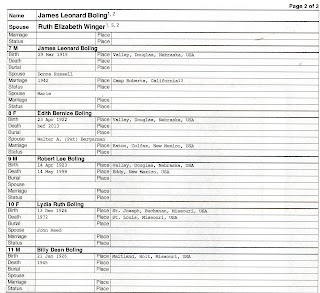 Leona's mother, Etta Lorene Boling (Carpenter) was one of 11 children of James Leonard Boling (1884-1942) and Ruth Elizabeth Winger (1891-1928).  Eight of the children were born in Missouri, and the other three were born in Nebraska.  I know very little about the Boling history, so I don't yet know what took them from Missouri to Nebraska and then back to Missouri where the two youngest children were born, but I'm trying to find out. 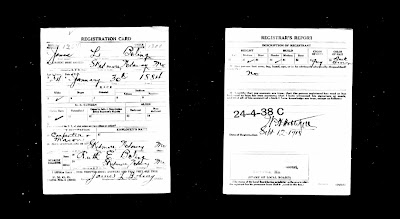 A granddaughter reports that James and Ruth raised a hard working and close knit family.  From James' World War I Draft Registration Card, we learn that he was employed in 1918 as a carpenter and mason.  His obituary states that he was "industrious" and "well liked by all with whom he came in contact."

As was typical for that generation, Ruth was at home with the children - which would have been no easy task as the mother of 11!  Grandma Tootie (Lorene got the nickname of Tootie from her dad) told of her mother's great cooking, but added that she couldn't bake a cake.  As a result, Tootie baked all the cakes for the family - and I'll bet there were many - from the time she was eight years old.

In the stories that follow I'll share what I know about the Boling family including Ruth's early death, which necessitated a variety of living situations for the children still at home.  I've been fortunate in making contact with one of Leona's Boling cousins who is helping me with names, dates, and places and hopefully some more of the family history stories.

In May, 2011, Don and I went with his mother on a family history trip, visiting some of the places where her ancestors had been born and/or lived.  Our first stop was Ashland, Nebraska the community where Leona's maternal grandfather, James Leonard Boling had lived at the time of his death.

There is something about visiting the places where family members actually spent time and worked and raised children and farmed and laughed and cried and lived and died that strikes a chord in me as I try to imagine their lives.  Ashland was a great starting point for my first family history trip, because it was everything I imagined an ancestral town should be: small, quaint, picturesque, and home to a charming public library.

I loved the stone arches on the bank building, now being used as offices.


I'm sure this home was in Ashland when James lived there between 1936 - 1942, and probably for many years prior to that.  It was an interesting contrast between old and new with the air conditioner sitting next to the stone foundation.

The cemetery was at the edge of town.  As Leona had been there once before, we were confident that we would find Grandpa Boling's grave.  The volunteer was so willing to help us, and she was delighted to show us the recently completed display area which allowed us to easily locate the grave. The pictures of his grave can be found here.

Our last stop in Ashland was the public library.  Not only did it look like the set of an old movie, the smell that greeted us as we stepped inside was perfect!  Books (old and new), wax on hardwood floors and a little bit of mustiness blended to create the quintessential library atmosphere in the small and crowded rooms of the outdated building.  A huge sign on the lawn proudly announced construction on a new library - thanks to a bond that had passed. Is it wrong of me to feel a little sad about that progress?

The microfilm area in the library was accessed only by way of a very dark and narrow stairway leading to the basement. We cautiously made our way down the steep steps (wondering all the while if our librarian guide would be able to navigate them successfully) and then squeezed into the tiny room where we found the microfilmed newspaper reports of James Boling's death.  Success!


Whenever you go on a trip to visit foreign lands or distant places, remember that they are all someone's home and backyard.  -Vera Nazarian

Ida Jane "Jennie" Kimball was second daughter of William and Sarah Kimball, and the sister of Martha Amanda Kimball Wisemiller, who was Louis Butler's great-grandmother.  She was known to the Butler family as Aunt Jennie, and as evidenced as some family pictures I have, enjoyed a close relationship with her nieces and nephews including Jesse Butler, Lou's father.
This past week with the help of one of Lou's cousins I've not yet met, I've discovered a very interesting, yet very sad story about Aunt Jennie's death.  Family stories told of Jennie's last husband poisoning her, but until this week we had no proof of that happening.  But now we know the rest of the story.
Does this look like an authentic suicide note?
Aug. 9, 15 Dear Artle    I Will son be    go on I Cant stand this pain    dont worry you    Will be better of    good by Dear             Jennie    I Cant get wel    god will for give me

Or how about this one?
you are not to blame for anything I took it all alone.
Those notes were evidence produced by the grieving husband of our relative, Ida Jane "Jennie" Kimbell McCormick, when he was put on trial for her death.  Jennie had been in poor health since shortly after their marriage (her third marriage) in June of 1914, and Arthur had hired a nurse and consulted a physician in an attempt to diagnose her mysterious illness. However, his efforts were to no avail and she died leaving an estate of $100,000.  The initial coroner's report determined that "she came to her death while seated at dinner August 9 from strychnine poison taken with suicidal intent." (article from Grand Rapids Press, 17 August 1915).


Jennie was buried in her family plot in White Cloud, Michigan, but concerns about her mysterious death were not buried with her.  Public opinion demanded that another inquest be held after the "women of Ladysmith, Wisconsin" shared their interpretation of the tragedy - which included their impressions of Arthur as a smooth talking, suave rascal who seemed to be very interested in Jennie's money.
During this investigation, Arthur (or Astor) McCormick claimed that Jennie had appeared to him on after her death and instructed him where to find her suicide note that would surely exonerate him.  He appeared at the district attorney's office with the first one, and when that didn't seem to be convincing enough, Jennie conveniently came to Arthur in a "vision" in the middle of the hearing telling him of the second note under the rug in her bedroom.
However, after convincing testimony from a handwriting expert, John Tyrrell, Jennie's notes were found to be phony and Mr. McCormick was found guilty of first degree murder and sentenced to life in prison, having killed his wife by poisoning.

To read the article that brought all this to light, click here.
Posted by LBB at 2:00 PM No comments:

To a young and starry eyed 14 year old Leona, Lou's Christmas gift of a cameo bracelet was thrilling. 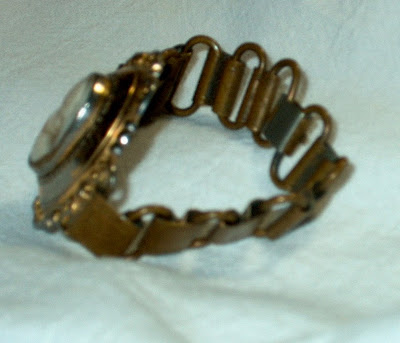 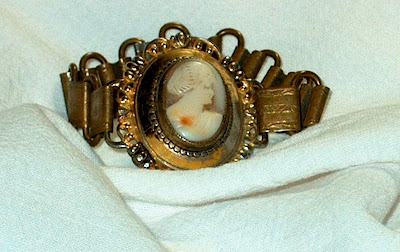 But even more exciting was the accompanying card which gave her real status as his "girlfriend." 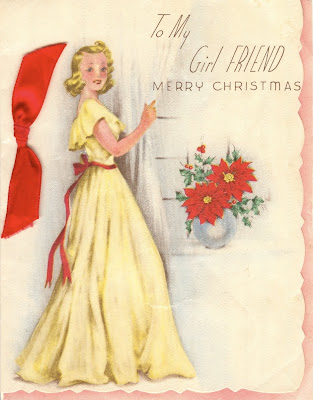 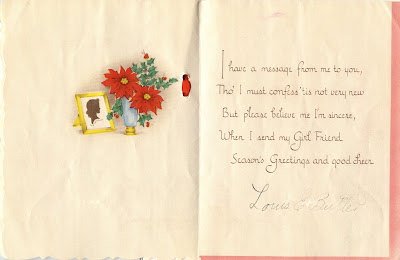 70 years of Christmas memories
Posted by LBB at 9:18 AM No comments:

. . . so many wonderful memories

A request to the Davis grandchildren for Christmas memories brought several responses.  These are from Alice Bell Higgs.
I have so many wonderful memories of Grandma and Grandpa Davis I hardly know where to start.
One Christmas I remember we went to Haswell and to the ranch and Grandma Davis had made a bushel basket of Cracker Jacks.  I have tried to make some for my kids and I end up with a whole bunch of very soggy popcorn not even the birds would eat! 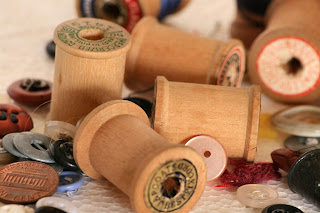 She also had saved a lot of spools and made whistles for all of us.
I've never been able to make those either. 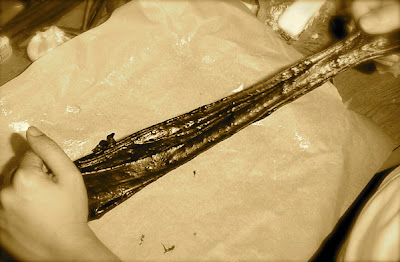 One time she was making taffy for us to help pull, and Hubert was just tall enough to reach up and put his fingers into that hot candy.  Grandma grabbed him up and sent one of the boys to the shop for a small can of kerosene.  She sat and rocked that baby with his fingers in that kerosene until he went to sleep.  Grandma always knew what to do.  I guess when you raise 14 kids you have to!  I don't remember if we made the taffy.
Posted by LBB at 3:16 PM No comments: 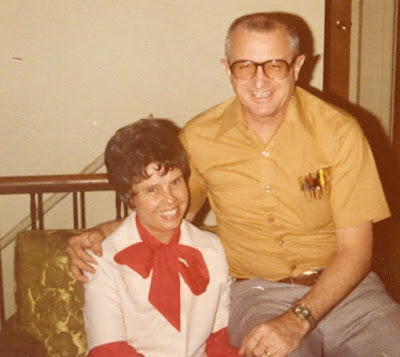 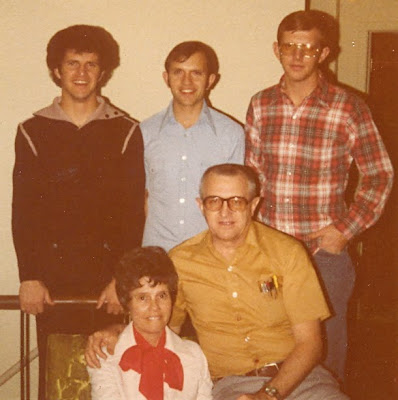 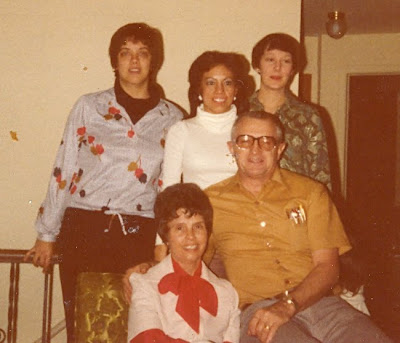 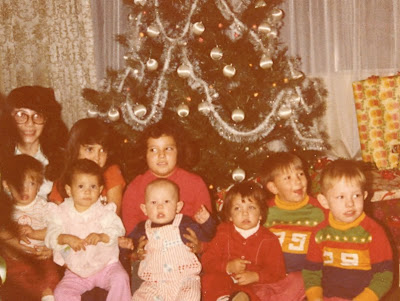 "This memoir is how I remember my own life. If you were there, you might recall something differently. It's OK. Your version can be written in your memoir." - Marty Halverson

LBB
A very amateur family historian and genealogist. Hopefully my passion for the subject will make up for my lack of skill and training. Enjoy my work in progress!

"Behold, I will send you Elijah the prophet before the coming of the great and dreadful day of the Lord:

Please feel free to share your memories relating to any of these posts by leaving a comment. If you have information, pictures, memorabilia, or any kind of family history you would like to have included on this blog, email me at lynnette.butler@gmail.com.